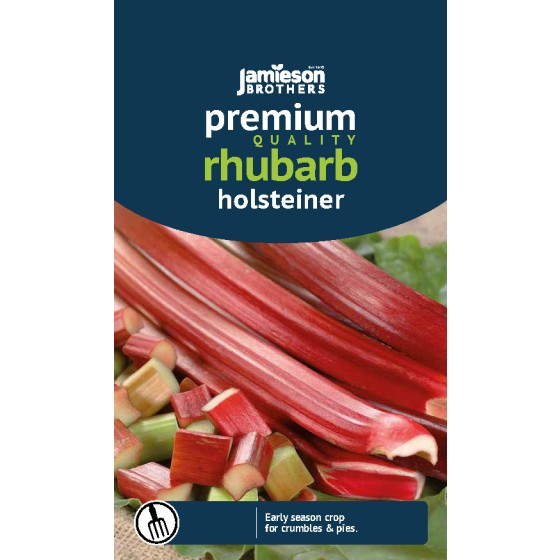 
Rhubarb Holsteiner is an ornamental variety which produces large green leaves and delicious red stems. This variety of rhubarb is ready from late Spring to early Summer.

PLANTING: Space rhubarb roots a meter apart, dig a hole large enough so any buds are 5cm below the surface of the soil. Cover and firm around the root.

CARE: Mulch around the crown of the plant in winter with well rotted manure. Remove any flower spikes that appear in Spring.

HARVESTING: Allow the rhubarb plant to settle in for the first year without harvesting any stalks. The second season only harvest a few stalks, by the third season most of the stalks can be taken. To harvest, gently pull and twist the stalks rather than cutting. Remove the leaves as they are toxic if eaten.
‘The Sutton’ can be used for ‘forced rhubarb’. Using a bucket, dustbin or terracotta rhubarb forcer, cover the mature plant in late Winter. The tender pink stalks will be ready to harvest in approximately one month. Only force a rhubarb plant every other year as it uses a lot of the plants energy.


Plant as soon as possible after purchase. Keep in a dry, cool and well-ventilated place until planting. Keep frost free. Grown from cultivated stock.

What You'll Need To Plant This Spring