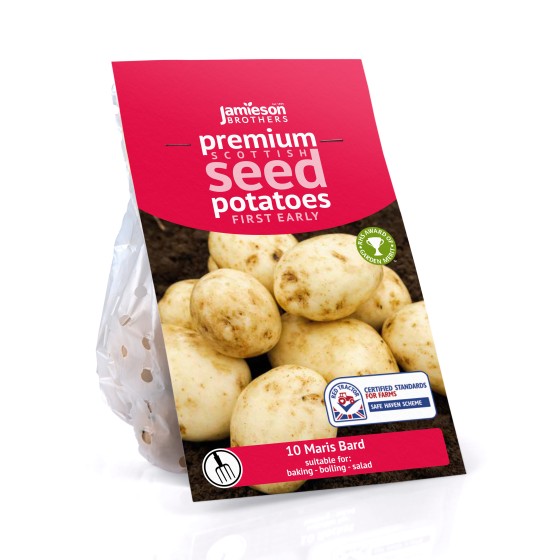 Foremost seed potatoes (originally called Suttons Foremost) are a variety of heritage seed potatoes first added to the national variety list in 1954. Although Foremost were an instant hit with gardeners who liked it's excellent flavour and resistance to disintegration when boiling,  it's average sized yields and disease resistance meant it never really took off commercially. That said, it does have good common scab resistance.

Foremost potatoes are short to oval in shape with white skin and waxy white flesh. Bake them, boil them or throw them in a salad.

Choose a place in the garden which has not been used to grow garlic, onions, shallots or leeks for at least two years. The soil should be open, well drained and not have been manured for at least one year.

Each potato should be 25cm from the next, with rows spaced 60cm apart. Always make sure the eyes are facing upwards. Drills should be 15cm deep.

Harvest June-July. Dig up mature potatoes and store them in a cool, dry and dark location. Potatoes can be stored for several months. Tip: when harvesting, remove all foliage and small potatoes from the soil and discard, to avoid diseases on next year’s crop.

Plant as soon as possible after purchase. Keep in a dry, cool and well-ventilated place until planting. Keep free from frost.

What you need for Growing Potatoes